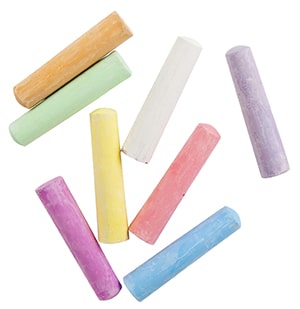 I remember one splendid morning, all blue and silver, in the summer holidays when I reluctantly tore myself away from the task of doing nothing in particular, and put on a hat of some sort and picked up a walking-stick, and put six very bright-colored chalks in my pocket. I then went into the kitchen (which, along with the rest of the house, belonged to a very square and sensible old woman in a Sussex village), and asked the owner and occupant of the kitchen if she had any brown paper.

She had a great deal; in fact, she had too much; and she mistook the purpose and the rationale of the existence of brown paper. She seemed to have an idea that if a person wanted brown paper he must be wanting to tie up parcels; which was the last thing I wanted to do; indeed, it is a thing which I have found to be beyond my mental capacity.

Hence she dwelt very much on the varying qualities of toughness and endurance in the material. I explained to her that I only wanted to draw pictures on it, and that I did not want them to endure in the least; and that from my point of view, therefore, it was a question, not of tough consistency, but of responsive surface, a thing comparatively irrelevant in a parcel. When she understood that I wanted to draw she offered to overwhelm me with note-paper.